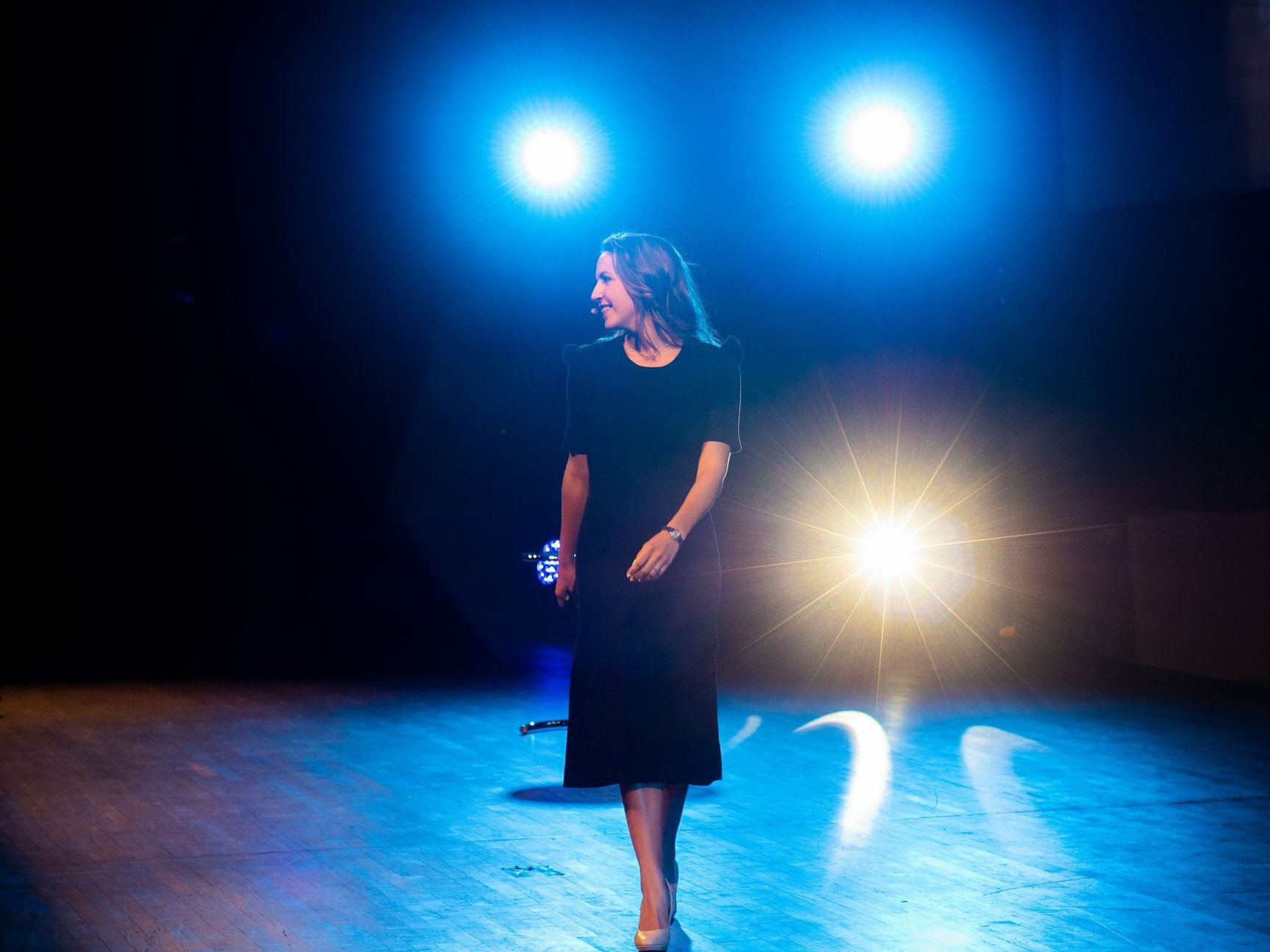 I can’t believe it’s already been a year.

I can’t believe an entire year ago – 365 days – I said goodbye to 10 years, a decade of my life, working and being someone else’s employee.

And now it’s been a year – a year of a roller coaster of emotions and experiences, being completely 100% on my own and still, there is so much to be learned.

Starting at the beginning, I knew the time had come where our marketing + branding agency, LoSoMo, which I had started merely as a side hustle, had gotten so big that the team needed more of my time, dedication, and input than I was able to give while still being a full-time employee at Entrata.

I knew that it was coming, but my husband and I had tried so hard to plan it so that he could have a corporate job with all of the group benefits, health plans, and insurance for our home and our two little boys. We were planning our swap for a good year, so he could take on that corporate responsibility and that safety net so that I could fully dive into full-time entrepreneurship.

After a year and half of trying with everything we had, it didn’t work.

My husband was unable to get a job and many tears were shed over the stresses of parenting and owning a business. We very much realized that we should not work together in the agency full time – we are not the type of couple that should or could do that and stay married, happy, and healthy for our children, which maybe comes as a surprise but it’s the truth. So we were met at a crossroads where the agency needed more of me, more than Scott could provide. And yet there were no safety nets that we could bring home for our family.

I went to my last big working conference in 2017 and heard an inspirational speaker named Isaac Lidsky, who built an entire organization and spoke about the power of moving forward. He emphasized taking a leap of faith, trusting your gut, and trusting your own abilities to take you to that next level without having any regrets. I knew in my heart that if I didn’t do this now, at this stage of my life, at this monumental moment, that I would have such intense regret that I never left, I never tried, and I was too scared. But when you become a parent, as those of you who have children will know, it’s not just about you. You are probably the last thing on the list. It’s everybody else that comes before you. It’s your family. It’s your little children, it’s your spouse, it’s your immediate family, it’s your employees, it’s your employees’ families. It’s everybody that you think of that places a burden on your shoulders. And though one of my greatest blessings is to care for my family and help others care for theirs, it’s also a very heavy weight to carry for one person.

As I was sitting in my seat at the conference, I felt such an intense burning in my entire body – goosebumps on my arms and burning in my chest. Being a faithfully religious person, I just knew that the spirit was confirming to me that it is time – now or never. And so, on the very last day, at the very last moment, I gave my executive boss a big hug and told him this is it.

“This is the last time that I will be speaking at this conference. I need to go and pursue my entrepreneurial dreams and give my agency what it needs to really take off.”

And so I did. We had multiple conversations, determined a three-week notice was appropriate, and the countdown began.

And I wish I could tell you that it all worked out and that my husband, after a year and a half of trying to find a job, finally got a job. But the truth is, in the very last week of my employment and after nine rounds of interviews with a company that had verbally promised Scott a very significant job, the company sent him an email saying, “We decided to go a different direction.” And I sat in Entrata’s stairwell crying in complete panic.

The negative thoughts circled in my head: “What did we do? How could we be so irresponsible? What did we just do?!”

Too late to turn back and so I left. I flew back home to Boca Raton, no longer an employee to someone else who I loved and had the best working experience I’ve ever had. I came home to a husband that was broken, unable to do what he felt like he needed to do for the family. And then me – catching the entirety of our family’s financial well being on my shoulders. For the first couple of days, I would just come home and just break down on the floor in tears.

I’m not qualified to tell you what it is that I experienced, medically speaking, but I felt such a tightness in my chest. I felt like I couldn’t breathe. I was terrified and all I could feel was complete and utter fear.

Now, it’s been 365 days since that moment when I came home on my first day of entrepreneurship 100% crying on the carpet. And here I am standing on my own two feet with everything that Scott and I have achieved.

Does that mean that we had stellar success for the first six to eight months of this year-long journey post-corporate life? Our business lost a significant amount of money every single month. We were pumping in money and making money. But we were not seeing the net return we needed each month. This caused us to pull from our savings every single month for almost nine months. You can imagine the stress this placed on me and my family (take what I felt on that carpet and magnify it 20 times).

In addition to that, as soon as I quit, as if things couldn’t get worst, my two-year-old son had a very bad asthma attack. Prior to this, his asthma had sent him to the hospital when we had corporate insurance and paid about $200 for the copay. When your child goes to the emergency room and is on breathing medications with only a Christian sharing plan, you get thousands and thousands of dollars in hospital bills sent to your door. All the worst-case scenarios struck – Scott was still unable to get a job and we still couldn’t find a dynamic where working together was healthy (aka lots of fighting). Because it was so stressful, our marriage was a bit on the ropes. I was a mess. Forget the Mary Poppins version of Mom, I was the opposite of that. I was always so high strung, so intense and so stressed. Our boy’s health improved but we were always scared that he could have another health crisis that would just totally take our financials under.

I finally hit rock bottom, and it wasn’t until I gave a real hard look at myself and just examined who I was, the person that I wanted to become, and how far away from all of that I actually was.

I started reading more self-help books than I have ever before and I started working out three to four times a week, which I hadn’t done since the birth of my second son. In the last 6 months, I finally raised my prices and not because I have any intentions of taking advantage of our amazing clients, but because I finally told myself I was more than enough. I had been underselling my services for YEARS out of this crazy notion that I hadn’t earned or deserved more. Which is honestly crazy given 10 years of experience, numerous publications, speaking engagements, and thought leadership. Plus, the team we had built in the 4 years of operation is the BEST its ever been. Why could other people tell me and our team how much value we provided them, but I didn’t see it in myself?

Most importantly, I don’t have to be all things to all people at all times. I get to decide my experience. I get to decide the value that I have for myself. And that’s not determined by somebody else.

And now it’s been 365 days, and we are doing the best we ever have. And I’m not just saying this for lip service. We’ve legitimately had the best three months we’ve ever had at our agency. I launched a new website that gives me so much gratification and, through MyModernBrand, I’m helping other people brand themselves as I have learned to do for myself the very hard way.

I’m finally in a position where I know who I am when I look in the mirror and I know what I’m not. My marriage is the best its been in years, my mom guilt is the lowest it’s ever been, and I’m the healthiest I’ve ever been.

Everything has changed and I’m more than the titles placed upon me. Mother, director, manager, boss, wife, sister, daughter, member, teacher… the list is endless. Titles are a part of life but it’s not who I am. I’m Veronica. My brand story is not the features and functions of my titles.

And now I’m on this quest to help as many people break free from what I struggled with and work on themselves, brand themselves, and flourish with their own strengths and uniqueness. I’m on a quest to teach people to not try to be like everybody else or what everybody wants them to be because everybody has a gift. Everybody is unique and nobody should ever extinguish that light in any of us. So here’s my love letter to you. I’m going to be real. I’m going to be honest, and I’m going to help you be the very best that you can be, as I’m on this lifelong journey of being the very best that I can be.

Subscribe to Veronica's weekly letter "From V to You" so you can grow your business and personal brand as she shares what's working for her behind-the-scenes.